Sport and Exercise Science for Life

Ian has always had a passion, and natural flair for passing on his knowledge and experience gained within his professional career as a Sport and Exercise Scientist. After leaving Liverpool Polytechnic in 1981 he became a fully qualified swimming teacher and swimming coach. He was also innovative in starting a swimming class for children with asthma, which was sponsored by the ASA and Fisons Pharmaceuticals. Ian has had asthma since he was 8 yrs old.  He began working at Leeds Athletic Institute in 1984 and with the support of Terry Denison at Leeds City Swim Club, he began to work as Sport Scientist at Leeds International Pool. After completing his PhD he began what has been along career in University lecturing, with posts at The University of Sunderland (teaching Applied Physiology and Health Studies), De Montfort University Bedford (teaching Sports Science), Canterbury Christ Church University (teaching Sport Science – specialising in Physical Activity and Health) and finally the University of Greenwich.

As soon as he completed his degree studies Ian worked with his personal tutor from Liverpool Polytechnic – Tom Reilly – to publish his final year dissertation (which was on swimming) in the prestigious journal Medicine and Science in Sport and Exercise, in 1983. This was a rare and outstanding achievement for such a recent graduate. He also started a part-time PhD at Leeds University within the School of Clinical Medicine (Cardiovascular Studies). His PhD thesis was titled \’Indices of cardio-respiratory fitness, non-invasively derived during sub-maximal exercise tests\’.

On completing his undergraduate studies Ian began working to apply and exchange his knowledge within the Sport and Exercise world. He worked as part of a support team in the Olympic preparations of swimmers like Adrian Moorehouse, who won Gold in the 100 m Breaststroke in Seoul (1988). He also worked as consultant Sport Scientist for the the GB swimming team. Ian became one of the few BASES accredited laboratory directors in 1985, and the Leeds International Pool laboratory was the first and only accredited facility outside of the University sector at the time. He worked to develop a dry-land swimming power monitoring system (using the swim bench) and this was to become a lifetime knowledge exchange pursuit. Dr Swaine holds a patent for his whole-body dry-land swimming ergometer and is currently waiting for approval of a patent for an isometric training device. 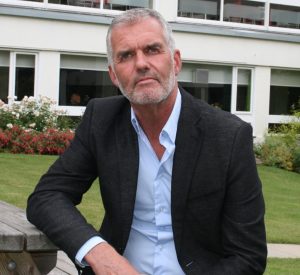